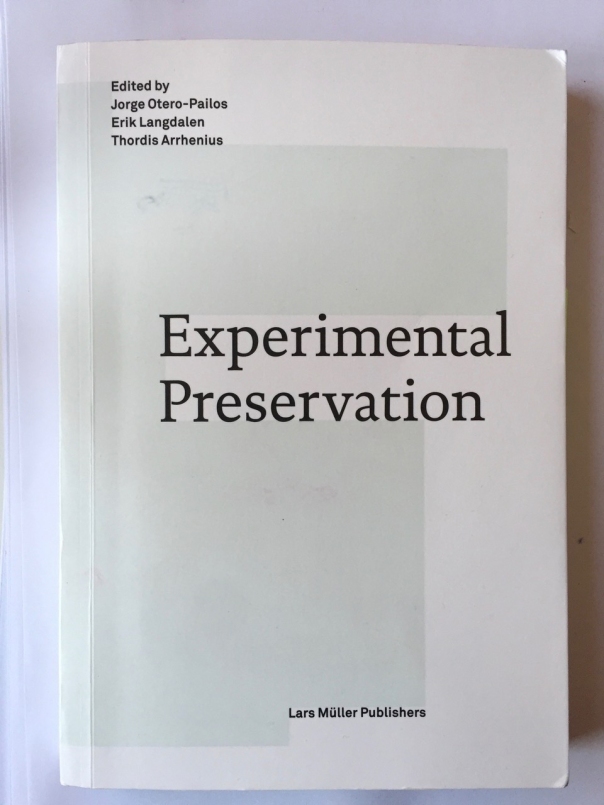 The book introduces a controversial premise, that there are indeed other ways of understanding –and as their evidence suggests–other  ways of practicing preservation. The editors, Jorge Otero-Palios, Erik Langdalen and Thordis Arrhenius have termed this alternative approach to preservation “experimental preservation.”  Published in 2016 by Lars Müller, the book offers for its core discussion a series of conversations transcribed from three different locations:  Oslo, Venice and New York. In addition, there are three  essays, by each of the editors, that suggest just how critical an experimental preservation practice is to these jaundiced post-modern, neo-nationalist, post-colonial times.

I vaguely recall a famous pronouncement by some British colonel commanding the allied artillery attacking the medieval Italian city of San Gimignano towards the end of WWII not to target anything before the 16th century. The Germans, on the other hand, in what could only be considered in their minds a brilliant strategic move, blew up all the most famous Renaissance bridges crossing the Arno river with the exception of the Ponte Vecchio. Destroying the most famous bridge in Italy would have gone too far even for the SS, so instead, to prevent the allied tanks from crossing the Arno, they merely destroyed the two medieval neighbourhoods that flanked either side of the bridge, covering the bridge’s access points in rubble. Though even that degree of sensitivity apparently is worthless by today’s standards, where bridges like Mostar, as well as the temples of Palmyra have been reduced to easy canon fodder.

While preserving by selectively destroying is not an argument that comes up in Experimental Preservation, the definition of preservation does get ramped up, permitting entire categories of outsider conditions to shake up the most stodgy of architectural  disciplines. We learn we can preserve by not preserving, by preserving that which no one would consider preservable, by preserving the ancillary documents dealing with preservation, as well as preserving by adapting and reinterpreting architecture into entirely new uses and opportunities. In other words, preservation can very well be the path to a new kind of architecture, that the editors- authors point out, is far more radical then most of the novel architectural practices that are going on at present.

Jorge Otero-Pailos points out that science of preservation is riddled with controversy, with numerous cases where preservation has failed its goals miserably. (to be continued. PTL)