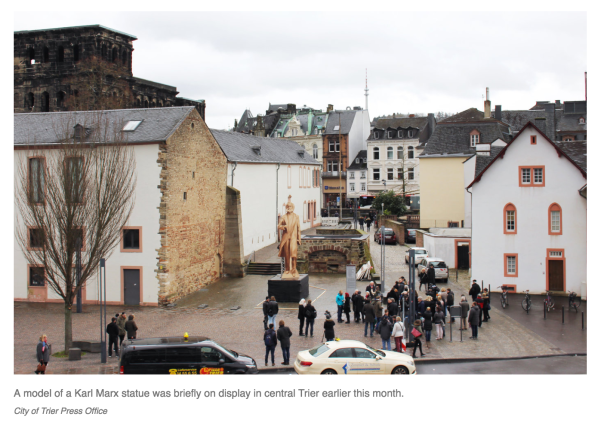 The German city of Trier has never been particularly fond of its most famous son, Karl Marx, who helped turn communism into an ideology that changed the course of history.

Conservative and Catholic, the picturesque city on the French border took an ambivalent view of the radical revolutionary, born into a Jewish family in 1818.

But now, as Trier prepares for the bicentennial of Marx’s birth, the city plans to put up a monument to the bushy-bearded thinker. Last week, Trier’s city council overwhelmingly voted to accept a 20-foot bronze statue of Marx as a gift from China — which, at least in name, is still a communist country.

Marx, co-author of The Communist Manifesto, cannot be held responsible for the distortion of his ideas after his death in 1883, says Trier’s mayor, Wolfram Leibe.

“Karl Marx acted in the historical context of the 19th century,” Leibe said. He didn’t participate in any atrocities or commit any crimes. He was a philosopher.”

Reiner Marz, one of a handful of dissenting voices in the city council, says there’s nothing wrong with honoring Karl Marx with a statue. The problem, he says, is the Chinese connection.

“The Chinese regime tramples on human rights,” he said. “I don’t want to receive any presents from that kind of regime.”

What’s telling is that not a single city council member from Chancellor Angela Merkel’s Christian Democratic Union voted against the Marx monument. Ideological clashes are a thing of the past, and Merkel has moved her conservative party considerably to the left.

China wields enormous clout in Europe. The country is the largest single foreign investor in Germany, according to GTAI, the German government’s economic development agency.

China is also one of the biggest sources of tourists for Trier.

At Karl Marx’s birthplace — a stately, three-story townhouse with creaky wooden floors — a quarter of all visitors come from communist China.