The Shoes on the Danube Bank is a memorial in Budapest, Hungary. Conceived by film director Can Togay, he created it on the east bank of the Danube River with sculptor Gyula Pauer to honor the people (mainly Budapest Jews) who were killed by fascist Arrow Cross militiamen in Budapest during World War II. They were ordered to take off their shoes, and were shot at the edge of the water so that their bodies fell into the river and were carried away. It represents their shoes left behind on the bank.

A dramatic  political transformation in the way history is treated by the Hungarian Government reflects the ascendancy of the Fidesz Party and  Viktor Orban as Prime Minister (1998-2002 and 2010 to present), two recent examples are the “German Occupation Monument on Szabadság tér (Liberty Square) see the link to the Budapest Times here:

This “overnight” monument was immediately contested with protestors establishing their own counter-monument immediately in front.

And perhaps just as disturbing is this recent example, where a statue dedicated to the internationally renowned philosopher Georg Lukacs is slated for removal from its original site to be replaced with a statue of Saint Stephen. 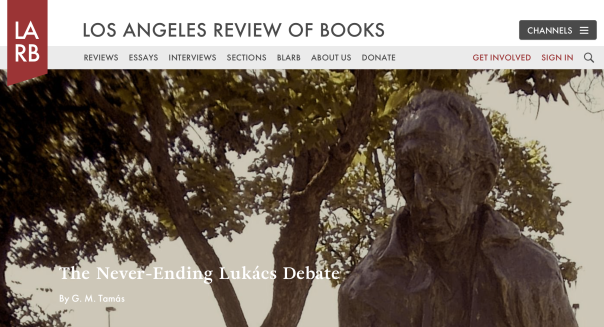 ON JANUARY 25, 2017, the Budapest City Council decided to remove the statue of Georg Lukács from a park in the city’s 13th district. We invited philosopher G. M. Tamás to comment on the significance of the gesture.

Before 1914, Lukács’s early works were received with great antipathy by the literary establishment in Hungary; they were found to be too “German” — that is to say, too philosophical, not impressionistic and positivistic enough. That was only the beginning, of course; from then on, Lukács would be attacked from the right incessantly, all his life. Lukács didn’t fare much better in leftist circles, either. When his most important book, History and Class Consciousness (1923), came out, it was savaged by both the Second and the Third International. It wasn’t to be republished until the 1960s. Lukács was given an ultimatum: if he wanted to stay in the Party, he had to repudiate the book and subject himself to self-criticism, which is what he eventually did.

He was harshly criticized in the Soviet Union in the 1930s. Soon after he relocated from Vienna to Moscow, Lukács was exiled to Tashkent, and silenced. But in 1945, the Party needed him — or rather, his fame — in Hungary. He agreed to return there rather reluctantly; East Germany was also an option. After the dictatorship was established and consolidated in Hungary in 1947–’48, the “Lukács Debate” was launched in earnest: he was attacked as a “deviationist,” a “bourgeois,” as a man who did not esteem Soviet “socialist realism.” (Truth be told, he was indeed all these things.) He was again silenced, forbidden to teach or publish in Hungarian, but some of his work was smuggled out and printed in West Germany.

In 1956, Lukács was a member of the revolutionary Nagy government. That’s why he was arrested by the Soviet soldiers and temporarily deported to Romania. When he was brought back, he was expelled from the Party, blacklisted, and pensioned off. Once again, he had to smuggle his texts abroad, this time to West Germany, where Luchterhand Verlag began to publish his complete works (a project taken over by Aisthesis Verlag in 2009). A slander campaign was launched against him both in Hungary and in the DDR; he was now condemned as a “revisionist” and, possibly, “counter-revolutionary.” Entire volumes were dedicated to making this case; they were even translated into quite a few languages.

In 1968, Lukács expressed his sympathy for the reforms and protests in Czechoslovakia, as well as for the youth movements in the West. He protested against the Soviet occupation of Prague, which resulted in yet another excommunication. Later, however, his Party membership was silently restored and, with the advent of reforms in Hungary, he was, to some extent, rehabilitated. But this came too late: he died in 1971. Absurdly, Lukács’s political troubles didn’t end after his death. In 1973, his disciples were condemned by the Central Committee’s ideological outfit and blacklisted; they lost their jobs and could no longer publish.

And now, in today’s Hungary, Lukács is declared, à titre posthume, an “enemy of the people” for having been a communist leader, a Party favorite, a propagandist in the service of the Kádár régime — the same regime that strove to shut him up and almost succeeded. That he served in the 1956 revolutionary government — officially celebrated today by the anticommunist conservatives — is conveniently forgotten.

Yet Lukács was indeed a communist, and in 1956 an authentic socialist revolution took place, in which he participated. But the most important revolution of his life occurred long before, in 1917. Before the Bolshevik Revolution, Lukács was a pessimistic conservative. Like so many German and Austrian writers of the time, he hated the bourgeoisie from the right. In 1917, however, he lost all his reserve and reticence, and all his respect for convention. For him, as for many of his generation, the revolution brought salvation: it saved their souls by proclaiming the end of exploitation, of class divisions, of the distinction between intellectual and manual labor, of punitive law, property, family, churches, prisons. In other words, it promised the end of the state.

The revolution also meant the end of utopia. “The class struggle of the proletariat,” Lukács writes in 1919 (the year of the communist revolution in Hungary), “is the objective itself and concomitantly its realization.” The driving force in human society, therefore, is history, not utopia, because the aims of the proletarian revolution are not outside the world, but within it. It would be silly to deny the religious undertones of such a view of history, which some of Lukács’s subsequent pronouncements would echo. For example, in spite of all his disappointments, he insisted on remaining a member of the Party — since extra Ecclesiam nulla salus, there is no salvation outside the church. It was his — and other communists’ — conscience (to use another religious term) that was the Party proper, not the politics or ideology of those who happened to be Party leaders at one moment or another.

In one of his major works, The Young Hegel (first published in 1948), Lukács tells the story of a giant thinker who called for a revolt against positivity — that is, against an ecclesiastical Christianity that regarded religion as mere tradition and as a valuable web of institutions, that preferred cathedrals to gospels — a thinker who then, ironically, became the foremost defender of the traditional order, of positivity, in order to rescue some achievements of the French Revolution against reactionary romanticism and fanaticism. This story, I think, is Lukács’s own intellectual autobiography in disguise. Between its lines, he concedes defeat.

Western audiences know only liberal anticommunism, the kind created by antifascist émigrés such as Karl Popper, Hannah Arendt, and Michael Polanyi, as well as by former far-left figures such as George Orwell, Ignazio Silone, and Arthur Koestler. After 1968, this type of anticommunism was picked up by East and Central European and Russian dissidents and clandestine human rights groups. But relatively little is known in the West about the “White Guard” type of anticommunism, which was prevalent on the European continent in the interwar period, and which is now triumphantly reborn in contemporary Eastern and Central Europe, including Hungary. The latter has tended to see socialism and communism as the uprising of the Untermensch, the biologically and spiritually inferior members of society. For these anticommunists, communism does not mean too little, but too much freedom, and the idea of equality is a sin against nature.

These are also the people for whom “Christian” means “Gentile” and for whom universal franchise means mob rule, just as “constitution” and “the rule of law” mean a loss of nerve. These people believe in the whip, in the cane, in putting women in their place, and in kicking the queer down the club steps. They believe in making deals with the swarthy Levantine and robbing him blind.

And however one feels about putting up graven images of controversial thinkers for the pigeons in the park, one must understand: it is these anticommunists who will destroy Lukács’s statue. They will scatter the contents of the Lukács Archives (owned and administered by the Hungarian Academy of Sciences, too timorous to do anything about it) to various dusty corners of Budapest.

Moreover, Lukács was Jewish. The régime does not openly declare its anti-Semitism, but this campaign is part of a general anti-Jewish drive.

Lukács’s presence as a major witness to — and philosopher of — some of the greatest revolutions of modern humanity cannot be tolerated in a regime like Viktor Orbán’s. It simply cannot. His “System of National Cooperation” worships soccer and Schnapps instead.

G. M. Tamás is a Hungarian Marxist philosopher and public intellectual. He is a Visiting Fellow at the Institut für die Wissenschaften vom Menschen in Vienna.