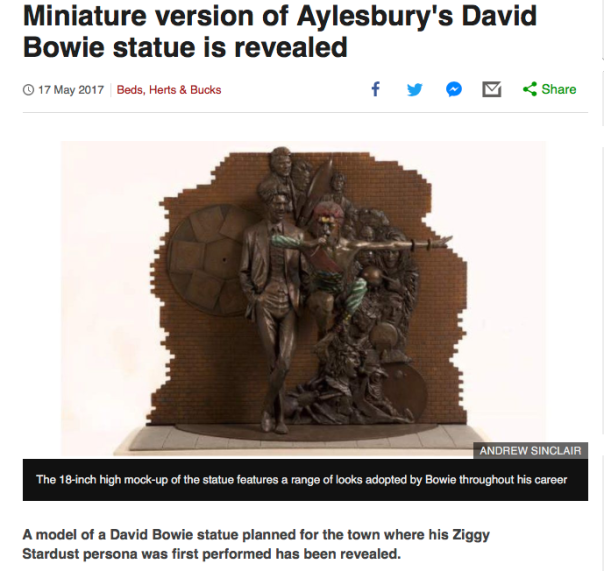 I am afraid this blog will be endless. after having just posted the winning proposal for the Victims of Communism Memorial in Canada, –see post below– i decided it is worth publishing this one here this monument to David Bowie, “Earthly Messenger” by the sculptor Andrew Sinclair  to be erected in Aylesbury, Buckinghamshire. While not Michelangelo’s David, by a long shot, the sculpture will have a loudspeaker system built in. See the description below. While old fashioned monuments dedicated to dead heroes are not disappearing, its interesting to note when a monument is created to represent some other kind of collectively shared  idolised figure in recent history. In this case David Bowie. Another list to compile, should we begin with Lou Reed?

“The bronze sculpture, named Earthly Messenger, will be unveiled later this year in Aylesbury, Buckinghamshire.

It will be installed under the arches in Market Square, referenced by Bowie in the song Five Years.

The work features a likeness of Bowie in 2002 looking down at Ziggy, alongside of some of his other looks.”

Funds for the statue, designed by sculptor Andrew Sinclair, have been raised through a £100,000 crowdfunding appeal, plus grants.

When completed, speakers mounted above the life size artwork will play one of 2,000 tracks every hour.

Some changes are expected to the design before the finished product is officially unveiled in March.