“Traditionally, souvenirs have been manufactured exclusively for the tourist market. But in a new, shrinking world—as the mobility of the population exponentially increases—souvenirs, in a different form, are among the few objects from home that can accompany a person to a foreign land. Souvenirs, then, have the potential of being transformed from a superfluous product of consumption to an object of emotional survival. Instead of a tourist cliché, a souvenir can serve as a proud representation of a person’s cultural identity. Think of all those souvenirs that multinational New York City taxicab drivers display on the dashboards of their cars. In the aftermath of the September 11th events, many of New York ethnic shops placed American flags and souvenirs next to symbols of their own cultures as a message of peace and understanding. In a world divided along the lines of culture, such object-symbols can no longer be marginalized.” Constantine Boym.

AND ALSO TRYING TO TRACK DOWN THIS FILM: 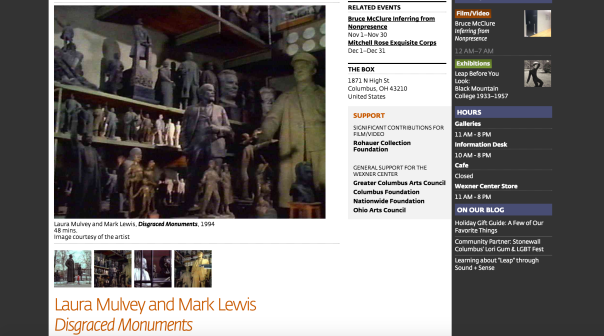 “In Disgraced Monuments, filmmakers Laura Mulvey and Mark Lewis use rare archival footage and interviews with artists, art historians, and museum directors to examine the fate of Soviet-era monuments during successive political regimes, from the Russian Revolution through the collapse of communism. Mulvey (also a notable film theorist) and Lewis highlight both the social relevance of these relics and the cyclical nature of history. (48 mins., video)”